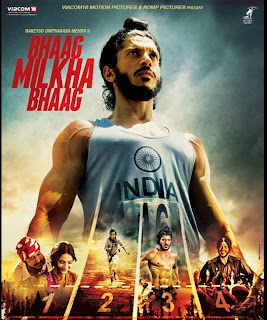 The film is a biopic drama about the flying sikh Milkha Singh tracing his journey from highs and lows, crafted diligently to weave a complete drama taking care of minutest of the detail. The marathon which starts with a motive to have a glass of milk and continues to take him to the pedestal of international athletic arena. It effortlessly shows the power preservance and dedication.


The films starts with 1960 Olympics in Rome in which India has been pinning hopes for its first ever Olympic Medal through its star athlete - Milkha Singh, who through-out is leading the race but just before finishing line is haunted by his troubled past which obstructs his pace and he finally finishes fourth in the historic running event. What follows next is the flashback of the Milkha’s life events right from his innocent childhood in the locales of Punjab (which is now in Pakistan) in undivided India  to his troubled youth in tracing from refugee camp to the streets of Delhi in post independence India. His first impression of running can be traced back to his childhood days when he used to walk on foot to go to school and during summers the distance used to be covered while running to avoid the scorching heat emitting from the ground. The partition of India witness unprecedented bloodshed which kills most of his family, including his parents. He finds his accidental solace in his elder sister with whom he re-unites in the refugee camp. As the life progresses, he discovers various aspects of life through stealing, landing in jail, experiencing the feeling of love at first sight and then the first heartbreak before eventually settling into Indian Army from where his life was about to take a new turn.

His running abilities are noticed by havaldar in the army who trains him to take part in racing championship. Race by race, sprints by sprints the athlete in Milkha is evolved & transformed to a international level runner who represents India at various events. The film ends with a friendly race event in Pakistan, in which Milkha is chosen to be a torch bearer for India. He doesn't find himself to be comfortable in doing the same owing to his troubled gruesome memories of the country. He finally gives up on intervention of his coaches and Jawahar Lal Nehru, the then prime minister of India. He renders the unprecedented performance on the track which earns him the title of ‘The Flying Sikh’, conferred by the Pakistan’s Commander.

My Thoughts about the movie. .

At the outset, to strike a corollary, the movie Bhaag Milkha Bhaag is about a SIKH legend portrayed by a MUSLIM and made by a HINDU, having music by a CHRISTIAN (all-right one of the music directors being christian). . . and in that sense its truly a reflective of our incredible India J

With his last outing Delhi 6 not living upto the expectations, the director Rakesh Mehra did had the onerous task of re-establishing himself at the benchmark level set by him through his earlier offering Rang De Basanti. And, trust me, he rises above that with the subject which is acutely researched and studied by him caressing every minutest detail to offer homage to the forgotten sporting personality of our country. Directing a biopic is a daunting task which exposes you the underlying risk of comparison and bashing, lest you fall short in any area of film making. And Mehra does his job with finesse and flair, amply supported by a wonderful scripted story by Prasoon Joshi who also happens to be the lyricist of the movie.

The film has the music by trio Shankar-Ehsaan-Loy with songs penned by Prasoon Joshi (who also happens to be the script writer). Most of the songs are situational and goes well with the movie without interrupting its pace. As a standalone offering, there isn't much exceptional about the album but being a situational album in nature, the songs are expected to garner flair post watching the movie. The album as a whole has perfect combination of mythology (Gurbani by Daler Mehndi), jazz & strings (Zinda by Siddhartha Mahadevan) and Sufism (Mere Yaar by Javed Bashir). It also marks the entry of Siddhartha Mahadevan, son of Shankar Mahadevan, into the Bollywood music. For the first time singer, he really sings well for the song “Zinda.”

The biggest strength of the film lies in the commendable and committed performances by its actors. Almost each of the actor plays his part to the perfection – be it a first timer Yograj Singh who plays Milkha’s coach or the ever green Divya Dutta who plays his elder sister; full marks to the director for extracting the power packed performance from the whole unit. Farhan Akhtar, in particular, shines like a beacon with his brilliant renderence of the life of legend; his make up and body language further adds life to the character. The three hour plus length of the movie might seem a bit too long to some but those loving a bipoic cinema (considering there isn't much of it in Bollywood  will surely find themselves immerse in the drama.

BMB is one of those climatic experiences that leaves you touched and stays with you even after you have come out of the theater  To reiterate, experience the magic of incredible India with a tribute to a SIKH legend portrayed by a MUSLIM and made by a HINDU, having music by a CHRISTIAN (all-right one of the music directors being christian).

Watch this out to have a peep into the life of India’s star Milkha Singh and also for some wonder full overall performances by the lead actors.

It always feels great to hear from You. . .

Heartfelt thanks for visiting here. . .Your thoughts & feedback on the post are awaited & would be highly appreciated. Do spare some time to drop in your comment about the post, page or anything you feel like. . . it always feels great to hear from you :)
Posted By Manish Purohit at 00:23