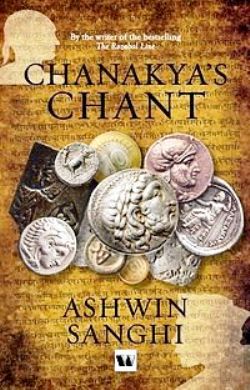 There's this Brahmin, in ancient India, who has been carrying the burden of the insult and agony of his father's gruesome murder determined to take a revenge & to give a responsible heir to undivided India. Then there's this Pandit from Kanpur, in modern India, anxious to have tryst with destiny to assume political supremacy in the country. Two different souls from two different periods weave grappling & engaging political drama which is bound to keep you glued till the finish.


'Chanakya's Chant' is a fast paced riveting piece blending the stories of two protagonists from two different era's - Chanakya (340 BC) & Pandit Gangasagar Mishra (Current). Its a well known fact how Chanakya – the strategist scripted the Chandragupta’s rise of power from rags and made him the ruler of undivided India. Burdened with his father’s murder, Chanakya sets out to take a revenge and end the melancholy that haunts him every now and then. He selects Chandragupta as the 'chosen one' and trains him at Takshila to impart and equip him with skills and wisdom of war and politics. His saga of revenge spans through years which witness him unifying the whole of India and thwarting various attempts by foreign invaders (specially Alexander) to usurp the Indian kingdom.

The book takes precedence from Chanakya’s story of evolving Chandragupta from nowhere to a great warrior & an efficient ruler. History repeats itself after what it seems like ages when Pandit Gangasagar Mishra accidently stumbles upon a cursed chant written by The Chanakya which reads Adi Shakti, Namo Namah; Sarah Shaakti, Namo Namah; Prithum Bhagvati, Namo Namah; Kundalini Mata Shakti; Mata Skakti Namo Namah. Taking recourse from the strategist himself, he sets on a journey to follow the footsteps of his idol and create a game of twists & turns; trust & deceit and diplomacy & manipulations to make his chosen one as the ruler (read Prime Minister) of India.

Does Gangasagar match upto the political skills of Chanakya to give his chosen one the crown to rule India? Would Gangasagar manage to do what Chanakya did about two thousand years back? What’s the curse attached to the powerful chant of Chanakya?

Grab your copy to unveil the answers to these and to discover the game of ulterior political motives involving thrill and suspense.

This was my first attempt to read a political thriller, a genre which (cautiously) remains unexplored by me till now. But it was perhaps the first word of the name that caught my attention and I just couldn't hold to grab a copy of the book. We all know Chanakya as a great strategist, scholar and diplomat. His works like Arthashashtra continue to inspire people even now and find relevance even in today’s world. Some of his quotes really leave me in a state of awe wondering how the hell does he managed to represent the current helm of affairs such brilliantly even thousands of years ago !!!

Coming back to the book, the author Ashwin Sanghi, quite brilliantly, blends two stories from different eras to churn out a melodramatic package that has all (well..almost) the ingredients of making it a good read - wit, humor, conceit, deceit, treachery, jealousy and all other epithets associated with polity. Though, the basic soul of both the stories remain the same, the characters & treatment thereof, is something, that distinct them both. Full marks to the author for doing in dept research about the subject before resorting to create the aura of Chanakya’s ideology in current period. The story is very fast paced and with two stories of different era running simultaneously, it really binds the reader’s attention to the last page not leaving any scope of lousiness.


On the flip side, the climax of the novel is somewhat predictable and doesn't leave a lot to reader's imagination. Also, the fact that only two persons viz. Chanakya & Pandit Mishra are the sole heroes of the story, all other being just secondary to them (including the great Chandragupta & his modern India counterpart Chandani) might just not go too well with some of the readers. Also, with so many twists (though riveting) in the plot & sub plots, the characters might confuse the reader a bit but it all falls in right place at the end.


All said and done...the book indeed commands a read simply for the terrific twists and turns in the story & also for Chanakya's pearls of wisdom. The way the author crafts and weaves the plot is simply superb, this coupled with his master writing skills makes the book must read. This also marks India’s formalize entry to the arena global thriller writers. . .

Must for all the lovers of political thrillers and also for those who want to have a stint in the genre. . .won’t disappoint for sure !!

Ashwin Sanghi—entrepreneur by day, novelist by night—did his schooling at the Cathedral & John Connon School, a B.A. (Economics) from St. Xavier’s College, and an M.B.A. (Finance) from the Yale School of Management. Besides being a businessman, Ashwin manages a parallel career as writer of fiction. Ashwin’s first novel, ‘The Rozabal Line’ was originally self-published in 2007 under his anagram-pseudonym—Shawn Haigins (that’s the name in which he manages his facebook page). The book was subsequently published by Westland in 2008 and 2010 in India under his own name and went on to become a national bestseller. ‘Chanakya’s Chant’ is his second novel in the historical-fiction genre. The book has remained on AC Nielsen’s India Bookscan Top-10 for all of 2011. It won the ‘2010 Crossword-Vodafone Popular Choice Award’ in September 2011. Ashwin lives in Mumbai with his wife, Anushika, and his eight-year old son, Raghuvir.

To know more about him, visit his website www.ashwinsanghi.com

It always feels great to hear from you. . .

Heartfelt thanks for visiting here. . .Your thoughts & feedback on the post are awaited & would be highly appreciated. Do spare some time to drop in your comment below about the post, page or anything you feel like. . . it always feels great to hear from you :)
Posted By Manish Purohit at 01:09