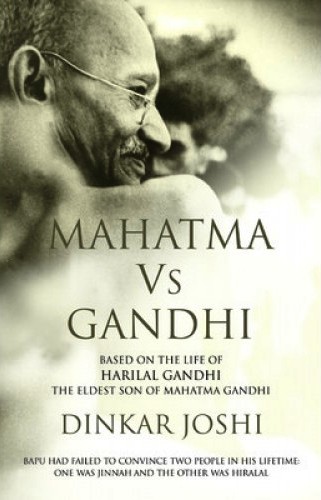 ‘Bapu had failed to convince two people in his lifetime one was Jinnah and the other was Harilal...’ Thus starts the journey of anecdotes, exploring the personal anguish and mental torment between the father (Mahatma Gandhi) and his eldest son (Harilal Gandhi).

‘Mahatma vs. Gandhi’ efficiently captures various phases of Harilal Gandhi right from his childhood to his eventual abrupt end. The book ravels through the time when young Harilal has great respect for his father, in fact he supports his Satyagraha movement and ideas & aspires to become a barrister like him. However, the principles and ethics of the disciplined father place him in a testing spot more often than not & make him dejected and dismayed with the outcome. The label of being a ‘Junior Gandhi’ starts dampening his spirits, losing his individual identity and with sequence of events unfolding, the relationship between the father and the son start degrading & Harilal develops the feeling that whatever wrong that’s happening to him is due to his father. The only solace he could find amidst all the despair is in ‘Baa’, his mother. The book also very finely reflects various junctures when Baa voices her concerns over Bapu’s way of handling things and raises her voice for her sons’ future.

Harilal is born in the family of the father of nation, with the legacy of the name “GANDHI”, which after one point of his life starts stifling him and he makes all possible moves to come out of it. But, call it his fate, luck or destiny, every time he tries to do something; it backfires with a higher intensity pushing him to a deep inferno of isolation and solitude. Bapu’s always had that queering philosophy of supporting all but his family which becomes evident at various junctures in the book like when he gives someone else a chance for higher studies in England when his own son wanted to pursue the same only because he doesn't want the world to coin that Bapu is recovering the value for his services to the society. These incidents leave a mark on the heart of Harilal, which aggravates further with frequent dejection of him by his father (like disapproving his marriage with his wife Gulaab etc); so much so that the burden of his surname makes it difficult for him to proceed. Even during the outer years of his life, the stigma of being the eldest son of the Mahatma Gandhi down plays him, with various sects of politicians using him as a mean to demean Bapu’s prestige; while he, arrested amidst his own inferior motives, falls prey to each of them. He baptizes himself to muslim converting from himself Harilal to Abdullah Gandhi and again re-converts himself to Harilal.

Does the father of nation really prove to be the father of his sons? Does the divide that develops between the father and the son become too wide to bridge? Does the legacy of being a successor of country’s most respected personality becomes curse to Harilal? Does, the otherwise mute ‘Baa’ raise her voice towards Bapu to safeguard her children’s future?

Grab your copy to unveil the answers to these and to discover the darker side of being a Gandhi.

The author has crafted the book in an efficient manner which keeps the reader glued to it till the end. Unfortunately the events as unfolds in this true story make reader sad about the course of life the destiny had carved out for the eldest son of the father of nation. The manner in which the fate scripts Harilal’s journey from abandoning home, responsibilities, drowning in alcohol and ultimately dying a pitiable death is indeed deplorable.

All in all a must read for everyone interested in the slice of history!!!

Dinkar Joshi is a renowned Gujarati writer who has written over 150 books which has been translated into various languages world-wide. The writing covers different areas of the life of mankind. The areas are viz. with social background, with spiritual background, the research work on Lord Krishna, Lord Buddha, Epics like Ramayan & Mahabharat etc. His Biographical novels are based on the life of different distinguished personalities e. g. Gujarati Poet Narmad, Mahatma Gandhi & his son Harilal, Mohmmad Ali  Jinnah, the creator of Pakistan, Rabindranath Tagore, a Nobel laureate Indian Poet.

The novel ‘Mahatma vs. Gandhi’ based on the life of Mahatma Gandhi & his son Harilal was adapted in a  drama form in different languages and was performed on the stage for quite a long time. The English version of this drama 'Mahatma Vs Gandhi' was performed at U.K., U. S. A., South Africa & other countries. A special show was performed at Rashtrapati Bhavan on invitation from the then President K. R. Narayan.

To know more about him, visit his website www.dinkarjoshi.com