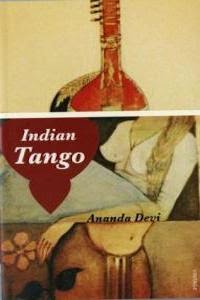 This review was done for The Tales Pensieve (TTP) under their reviewer program. I thank TTP for giving me the opportunity to review the book.

Behind The Book. . .
Lost to the meaning of her life, a foreign writer arrives in Delhi seeking the wordless company of strangers. Delhi is an exploded sun, bleeding everywhere its untrammelled chaos: the feral dampness of bus fumes; the suicidal rush of scooters; the autorickshaw scats impregnated with thousands of odors - nauseous accretions of India's muddy human tide. The men with their stinking bidis rule as masters and the women remain walled in by centuries of tradition.


The author, infatuated by a quiet lady on the street, begins to seek the untamed and undiscovered country that lies below her sari, the delicate throbbing hidden beneath her silence. As she rediscovers her voice and the ability to write a story, and as monsoon arrives, low and heavy-bellied, washing away the concrete barricades of custom, a secret encounter in a music store opens up an ancient darwaza of forbidden pleasures.
Bursting with sharp irreverence, Indian Tango is a story of fleshy transgression and unlikely liberation in the patriachopolis of New Delhi.

Book Synopsis. . .
Indian Tango was originally written by the author Ananda Devi in French and was translated to English by Jean Anderson. The book paints the story of Subhadra Mishra, a woman in her fifties who epitomizes the typical middle class women meandered between the family responsibilities & social inhibitions. She is married to Jugdish and is entrusted to take care of the husband, the mother in law along-with the daunting task of managing the house. She symbolizes a typical housewife who has completely forgot and submersed her own self under the weight of her family obligations to carry on her responsibilities, performing her duties diligently throughout.
Standing at just the start of her fifties, she gradually feels confined and suffocated over the way her life is leading and everything around appear alien to her – her ongoing life’s routine gelling in perfectly with the laid down social code of conducts, her relationship with her husband, her ever interfering & intolerable mother in law (who increasingly puts pressure to accompany her to a pilgrimage). The sense of estrangement creeps in and transforms into the strong desire to break free from these social inhibitions, to shed the forbiddance, to explore the untouched realms, to feel the un-felt desires & to enjoy the newly found pleasures of life. She takes herself to the streets of Delhi to re-discover the life’s lost meaning and surrenders herself completely to whatever those meandering movement of her soul stirring walks on the street brings to her. Of the various impressions she derives from this soul stirring journey, the growing inclination towards classical music and the strangely changing sexual preferences gains her affirmation. She finds herself completely mesmerized by the strings of symphony woven by her new found love for female, in form of her growing infatuation for Bimala. The story gradually treads exploring further the new found desires of Subhadra and her growing sensual temperament towards her new found love. She indeed does breaks away from the usual orthodox social norms and fantasizes about that unknown woman along-with yearning for the sitar – the musical instrument.

My Thoughts. . .
There are certain books with which you have love & hate relationships in the sense that they just don’t strike enough chord with you so as to grip you along through-out. At the same time, however, there remains something in the book which doesn't let you leave it in between. Fitting perfectly in that canvas was Indian Tango by Ananda Devi – while on one hand I did find it hard not to read it (thanks to the beautiful usage of language & words creating exquisite imagery in the reader’s mind), on the other hand, there wasn't enough charm in the book to hold the reader glued to it through-out.
Beautiful themes, lyrical tones and exceptionally well usage of words make it a delightful and captivating read. Infact, during the course of the pure reading of the book, one just can’t help but to admire & praise the author for her mastery over the language which surely transforms the reader to the streets of Delhi amidst a soothing monsoon rains. The whole book at various junctures is so poetic that you can just randomly pick it up & enjoy the imagery it creates in your mind once you read an extract. This is infact an interesting combination of a book written by an Indian author in French and translated into English (I am sure it must be a deliberate attempt by the author to write the book in French rather than in English).
However, despite the aforesaid, the book as a whole doesn't offer a wholesome enjoyable ride. While the one who have poetic bent of mind and tend to enjoy the beauty of language would enjoy the tits and bits of the same, there exist very little charm for the reader to carry the book till the end. That’s the reason perhaps I said about the love and hate relationship with the book. Having gone through the book till the last pages, there remains a feeling of un-quenched thirst which is really startling for any good book.

One can surely get hold of this book for its beautiful usage of words which are woven with such a fine sophistication that it really gives the reader a pleasurable experience in tranches but someone looking for a book to have a wholesome ride to enjoy other aspects of fictional story telling might just feel dejected and disappointed.
Rating: 2.75/5

About the Author. . .
Ananda Devi was born in Mauritius in 1957. The multicultural and multilingual aspects of her birthplace are echoed in many of her works, which explore with lyrical and probing language and imagery the depths of conflicted identities, with a particular focus on women and the consequences of nonconformity. One of the Indian Ocean's leading and most prolific writers, she has published poetry, three volumes of short stories and ten novels. Ãˆve de ses dÃ©combres (2006) was awarded the Prix des Cinq Continents de la francophonie and the Prix RFO.

Please click here to buy the book from Flipkart
This review was done for The Tales Pensieve (TTP) under their reviewer program. I thank TTP for giving me the opportunity to review the book.

~ Linking back to Write Tribe
Posted By Manish Purohit at 22:35