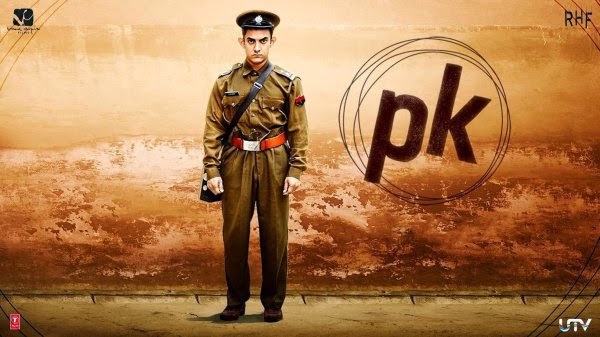 PK is a story of an alien who lands on earth on some research mission with his spaceship debarking him in a remote village in Rajasthan. However, no sooner does his feet lay on earth, he finds himself stranded on his newly found haven with his remote control stolen by someone (Welcome to THE EARTH, Mr. Alien). The remote control is indispensable for his return to his planet as this is suppose to give signal to his space ship to come back. The movie explores his tryst with his destiny and also the struggle he faces on his journey of searching for his stolen remote control.

During the course of his journey, he encounters the God and beliefs of all different religions which advocate altogether different ways and manners to pursue & please the almighty. He does all which he is supposed to do to please every God to get the remote back. The whole web of conflicting notions and beliefs confuses him, making him question the basics and fundamentals of the almighty and the religions & notions embodying Him. The confusion grows further as to which sect, religion and group does he actually belongs to. In the meantime, his frequent inquisitive habit irks a self-proclaimed godman whose whole domain comes under the scanner & is threatened.

A heartbroken television reporter also tags along with this alien on his journey, in her quest to find a respectable story worth pursuing on her channel. The association which starts off as a reporter and news subject, gradually transforms into a bond of friendship wherein she strives to help a friend in need to get back to his home.

What follows on is a comical satire on God and Godman & also on many of those beliefs, rituals and orthodox ideas which people follow without really pondering over the rationale behind them.

It’s high time the Indian cinema should serve more than just a medium to entertain the audiences. With such a high and expanded reach, the Indian film industry should periodically churn out the movies which do spread some social message challenging the many taboos which are lurking in the dark shadows of our society.

PK is one such courageous product of our film fraternity which offers a wholesome entertainment on one hand, and on the other, challenges the hypocrisy and false aura built upon by the guards of various religions for the attainment of God. The comparisons with Munnabhai series and 3 Idiots are inevitable but the movie, even though not the best of Hirani, is indeed worth a watch and surely not to be missed.

(I have small confession to make here – Witnessing a spaceship coming onto the earth leaving behind an alien had actually left me in a jittery as to what is actually happening. I kept hoping that all would be well as this is The Raj Kumar Hirani film and (thank God) I wasn’t disappointed J )

The dilemma of being Raj Kumar Hirani stems from the immense expectations the audience builds around his films especially after watching his Munnabhai series and his last offering 3 Idiots. The burden of anticipations increases even further when every damn critic and reviewer is ready with his sword (read pen) to critically review the film by the standards clearly benchmarked with his earlier offerings.

With PK, Hirani manages to hold onto the finesse and feel good charisma he has earned over the years of his tint in Bollywood. Raj Kumar Hirani’s direction of the film is nearly perfect, with the movie folding layer by layer with each passing scene. Almost every frame of the movie is visually blended with the message it attempts to convey and the fact the audience does manage to get the message signifies that the director has succeeded in his attempt of doing so.

The writer-director Hirani with his co-writer Abhijat Joshi have cleverly crafted various scenes in this near masterpiece depicting the plight and predicament of an alien thereby depicting the dissonance amongst religious (for example, when he finds that same colors white & black holds different significance for the people of different religions). The innocence of an alien who knows nothing about the earth, its customs religions & Gods has been brilliantly crafted while throwing a biting satire on the prevailing customs.

However, the problem stems occasionally when unknowingly the inferences are drawn between PK and Oh My God, as both seem to strike a similar chord. And it wouldn’t be wrong to say that such illations are not completely wrong. Further, I found the climax of the movie slightly lacking as compared to the formidable foundation the script lays down for the climax to unfold. When the so called confrontation between the godman and the alien was reduced to a mere small (and relatively weaker) dialogue exchange between the two, the viewer is actually left asking for abit more. Further, as the climax unfolds, it appears more of unraveling the comedy of errors than of a scripting brilliance of the writers or the sham of the godman (which it was supposed to portray). Still this minor glitch doesn’t really hamper the movie watcher experience which does offers him an entertaining ride.

The music of the film is composed by Hirani’s trusted aide Shantanu Moitra and a song each from the guest composers Ajay-Atul and Ankit Tiwari; the lyrics are penned by Swanand Kirkire, Amitabh Varma and Manoj Muntashir. The strength of the music of PK lies in the fact that most of the songs in the movie are situational and goes well with the movie without interrupting the pace of the movie.
Shantanu Moitra sticks to his trademark style with light and melodious musicals numbers which are subtle and soothing to the ears and is a déjà vu of his earlier works. Amongst four songs and instrumental piece composed by the music director, ‘Bhagwan Hai Kahan Re Tu’ and ‘Chaar Kadam’ leads the race.

‘Bhagwan Hai Kahan Re Tu’ is a soulful rendition by Sonu Nigam which reminds the listener of the song ‘Jaane nahi denge tujhe’ from 3 Idiots. Its indeed a refreshing experience to listen the veteran singer grooving to such a perfect piece aptly describing the dilemma of the protagonist as to which God to worship.

‘Chaar Kadam’ sung by Shaan and Shreya Ghosal is a soft romantic number which is typically a Shantanu Moitra composition (you will agree to me once you listen to it) which has the traces of his earlier compositions. This again has the tendency to remain in the listener’s mind. The other two numbers ‘Love is a waste of time’ and ‘Nanga Punga Dost’ are also melodious whacky numbers which again has been nicely composed and rendered.

‘Tharki Chokro’ sung by folk singer Swaroop Khan, has been composed by Ajay-Atul (of Singham, Agneepath fame) has got traditional rajasthani folk flavor to it. And ‘Dil Darbadar’ composed and sung by Ankit Tiwari are also good to hear.

The film totally belongs to Aamir Khan and once again re-affirms the fact as to why he is actually referred to as The Perfectionist. His expressions and dialogue delivery are immaculate especially the confusion & pain evident on his face at various junctures of his stint on the earth. The dialect used during his Bhojpuri language is impeccable. The pain and anguish visible on his face longing his return on his home planet his simply superb. The power of his performance is such that he manages to carry on the film at points when the script appears to fall short.

Anushka Sharma as Jagat Janani is lovely in her new avatar and delivers her part well. Saurabh Shukla as pseudo godman is excellent with superb expressions and reflexions. This completely takes the legacy of Hirani using the character artists well further (remember Asthana in Munnabhai, Virus in 3 Idiots).

Boman Irani and Sanjay Dutt Rajput are treat to watch in their respective cameos. Sushant Singh Rajput is one character who have slightly weaker role carved out, though he does deliver his part well within the limits of the script offered to him.

PK is one such movie which delivers a powerful message while offering entertainment to the audience. The balanced script (barring some minor glitches which gets balanced by lead actor's fine performance) with near perfect treatment by the director and some spell binding performance by the actors makes this a commendable venture at almost all the areas of the film making. It’s a sweet, feel-good movie which is definitely must watch as it has its heart at its right place and soul at the right corner. And when the heart and soul are at right places, it is bound to be right J

Watch the trailer of the movie PK here.

Heartfelt thanks for visiting here. . .Your thoughts & feedback on the post are awaited & would be highly appreciated. Do spare some time to drop in your comment about the post, page or anything you feel like. . . it always feels great to hear from you :)
Posted By Manish Purohit at 21:10