Searching for Mahatma, Remembering the Talisman. . . 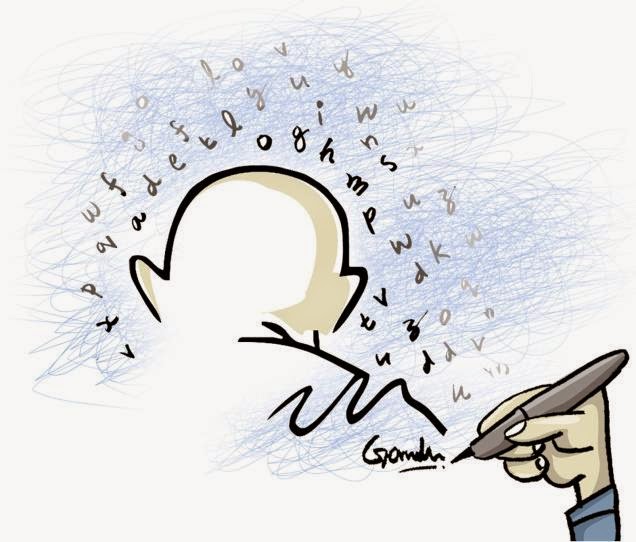 Today is 2nd October, the birthday day of Mahatma Gandhi. The word MAHATMA has its root in Sanskrit and is made of two words – ‘Maha’ meaning great and ‘Atman’ meaning soul. I often find myself wondering hard about the person named Mohandas Karamchand Gandhi, his life, his principles and most importantly his ethics & also as to the greatness of his soul so as to refer him as "Mahatma". The life of Mahatma Gandhi is truly an institute in itself and the fact that he stood to his principles and ethics through-out the life is truly commendable. It’s fairly easy to have set of governing principles in life but what’s actually demanding is to able to stick to them come what may. We know from what we have learned and studied about the man, that Bapu (as he was fondly called) has indeed sacrificed his personal and public life for his principles and for the people around (though there exist a considerable amount of debate from some sects of people over his unfair and unjust approach towards his family and children – Read Mahatma vs. Gandhi, for example, which deals with his relationship with his eldest son).

While there have been plenty of writings available on Bapu’s writing, his thoughts and his opinions. One of the most profound and deepest thought that he left behind is his TALISMAN. The Talisman also assumes relevance as it is one of those pearls of wisdom which a person is confronted with during his early phase of life, thanks to its incorporation in (almost) all the prescribed text books. It’s actually a nostalgic feeling to think and recall Gandhiji’s Talisman as it takes me to those NCERT school books whose front page always had this piece of writing bordered with tiny sketches of flowers & Bapu walking with his sticks, with his signature appended at the bottom. Though I remember the thought and message of the talisman, I couldn't recall the exact verbiage of the same. So I resorted to 'Google Baba' and entered the text “Gandhiji Talisman” only to realize with a smile that Google don’t bother about the suffix “Ji” attached by me to the name. But it was kind enough to consider my other inputs and yielded result about the exact wording of the talisman, which goes like this: 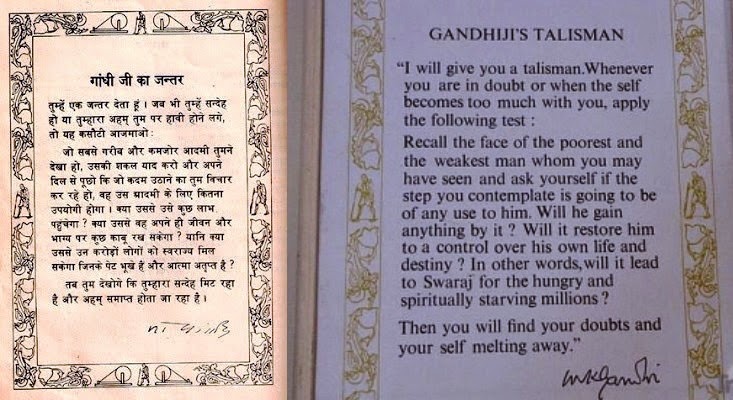 "I will give you a talisman. Whenever you are in doubt, or when the self becomes too much with you, apply the following test. Recall the face of the poorest and the weakest man [woman] whom you may have seen, and ask yourself, if the step you contemplate is going to be of any use to him [her]. Will he [she] gain anything by it? Will it restore him [her] to a control over his [her] own life and destiny? In other words, will it lead to swaraj [freedom] for the hungry and spiritually starving millions? Then you will find your doubts and your-self melting away."

Just a plain reading of this is so soothing to the heart and soul – just read it once more and you will realize that how thoughtful and beautiful are the thoughts embodying these words. Right or wrong, valid or invalid, practical or theoretical  - I don’t know. And frankly speaking I don’t care as I strongly believe that if something is soothing to your heart, it ought to be right. It’s also pertinent to note here that this is one of the last notes left behind by Bapu sometime in 1948 expressing his deepest social thought.

Its again worthwhile to understand the backdrop of 1947-48 which, perhaps, has got relevance to the talisman itself. That was the time when the whole nation was going through one of its worst phase, bearing the agony and suffering of partition. The office bearers agreed to divide the territorial borders of India and Pakistan by drawing a line on the map, without realizing that it divided not only the people but also their thoughts, not only their house but also their homes and not only their possessions but also their heart. One fine morning someone wakes up with the eyes still moist with the dream they saw last night and heart still pumping with the desires half risen from the sleep only to find themselves on the wrong side of the line. The home, the people and the neighborhood with whom they have grown and shared their joys, sorrows and dreams have suddenly become an alien as they figure amidst one of those unfortunate souls whose nest have found their perch on the other side of the line. The effect of the partition was so horrendous and so gruesome that its vibrations are still felt by the people of both the countries – directly or indirectly.

The Talisman was written during that traumatic period when society and the people were bashed and inflicted with the horrors of separation and communal carnage. Though the situation now has improved much from then, the talisman can still be practiced as the oppression and struggle within continues.

Let us try to understand the talisman - Whenever we find ourselves lost in the sea of doubt or whenever our own self start hovering our head, we should stop and ponder as to whether the step we are taking, the spend we are planning would do any good for the oppressed & deprived, to lend their face a smile and heart the contentment. If we at times, follow this and actually do practice, we will find that this really provides pleasure to the heart, the feeling which is really hard to explain (just try to recall the last time when you gave food to the hungry across the roadside & the feeling which kindled your heart seeing the smile on his face and the wishes on his lips). And this is true in almost all spheres of life - consider, for example, the case of an organization. If the top management keeps in mind the interest of the lowest grade employees while framing personnel policies, the policy and procedure would surely prove beneficial for the Company as a whole. Similarly, while devising product, giving utmost importance to the ultimate consumer needs and preference always pays well to the Company.

However, the unfortunate part remains that we have forgot to apply this simple rule to our actions and deeds in any aspect of life. The biggest irony remains that this is despite the fact that we are confronted with the talisman right from the early age when we start our schooling and this continues for next 12 years when almost on a daily basis we come across that piece of writing, but (guess) we choose to just flip it over.

The world still has its own share of griefs and sorrow with many souls still striving hard, hard and harder for meeting their ends of life. We are fortunate enough to have home to live, clothes to wear, food to eat, clothes to wear and bed to sleep, there are masses who are even struggle to survive leave alone living. Let us all resolve to do our bit and give something back to the society. Our effort might appear like a drop in the ocean but during a drought every single drop count. And every ocean is born out of a droplet and one yearning soul can actually lighten up thousands of souls with a simple act of kindness and concern.

Be the change you want to see in the world – it’s high time that we actually introspect and search the Mahatma within us. While pondering over these things, I am just remembering few lines which says. .

The crux of above lines is that every heart has its own share of the angel (the Mahatma) and the Satan (the Shaitaan). To realize the angel (Mahatma) within we need to bury and overpower the Satan (Shaitaan) & then there will be Mahatma in all the hearts. Let us all search that Mahatma within and make this world a bit better place to be in. Let us make a difference to at least one life, let us bring a smile to at least one face, let us lend a dream to at least one eye and its only then our life would have some meaning & Bapu would be truly remembered. Let us all resolve to search the Mahatma within in, in remembrance of the Mahatma who have shown us the path.

Closing with a thought from Swami Vivekananda that is sure to kindle the heart to ponder. . .

“The essential thing is renunciation. Without renunciation none can pour out his whole heart in working for others. The man of renunciation sees all with an equal eye and devotes himself to the service of all. Does not our Vedanta also teach us to see all with an equal eye? Why then do you cherish the idea that the wife and children are your own, more than others? At your very threshold, the Narayana Himself in the form of a poor beggar is dying of starvation! Instead of giving him anything, would you only satisfy the appetite of your wife and children with delicacies? Why, that is beastly!”

Heartfelt thanks for visiting here. . .Your thoughts & feedback on the post are awaited & would be highly appreciated. Do spare some time to drop in your comment about the post, page or anything you feel like. . . it always feels great to hear from you :)
Posted By Manish Purohit at 00:01

Email ThisBlogThis!Share to TwitterShare to FacebookShare to Pinterest
Labels: Scribblings