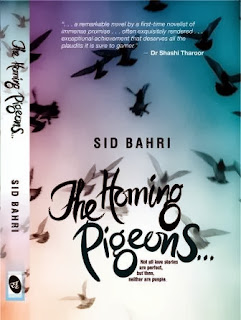 The Homing Pigeons comes across as a heart touching story encompassing the aforesaid ironies of not so perfect love between the two imperfect souls – Aditya and Radhika. Love, at times, comes across as a puzzle to solve with the head and the heart voicing their opinion in different directions often making us commit acts we don’t want, landing us in the situation we don’t foresee.

Aditya, once a successful banker, is introduced as a recession hit victim who is leading his life in despair with no visible way to turn his fortunes. He has been through the peak of his professional career in the country’s leading bank, before finding himself at the receiving end of the recessionary wave. This wave exposes him to the dark side of life wherein he finds himself whirling between countless liquor shots and failed job interviews. This recessionary impact is not limited to his professional life but his personal life is also completely in shambles. He survives on his wife’s money, who leave no chance to nag him down further into the dark pit of desolation & disappointment. The only solace he finds is by immersing himself in the glass of liquor which absolves him of his miseries for some time. The rendezvous with a beautiful stranger during one of his evening-outs changes his life completely. He is thrown at a juncture which opens up a lucrative but socially ‘taboo’ avenue for him; something which he isn’t really proud to go for but for his current miseries and desolated bank balance, he finds himself turning into a gigolo.

Radhika, on the other hand, emerges as a mid aged widow who had troubled childhood & who has always struggled with the choices life has offered her at every juncture. Her step daughter, who is just few years younger than her, is getting married leaving her with huge fortune and complete freedom, something which she has aspired & longed for since long. However, the new found freedom, instead, pushes her back in retrospection of her past life – difficult childhood, unrequited love, unsuccessful marriage & repressed longing for her life’s love. Her character, initially, is shown as materialistic woman who just wants money and independence in life; however, as the the story progress, it evolves as someone alone in thoughts having a simple & purer desire of being with the person she loves.

The story is narrated from the perspective of these two protagonists alternating between them reflecting a piece of their mind and thoughts every time.

How does Aditya transforms himself from a banker to a gigolo? Who is that stranger into whom Aditya bumps in the bar? What’s the story behind Radhika’s troubled childhood and unsuccessful marriage? What circumstances keep the two lovers apart? Why do they marry different persons despite in love? How does these two seemingly different stories finally converge into one?

Grab your copy to unveil the answers to these and, more importantly, to welcome the grand entry of a cherished author into Indian English Literature.

I remember reading the popular adage “Don’t judge a book by its cover” and do endorse the same symbolically but somehow in literal sense of the phrase I somewhat remain bias. I personally feel that the title and the cover are as important in the book as the content and language. The title and cover of this book is one of the better one I have been a witness in recent times, gelling with the overall experience of the book reading – just perfectly.

The title of the book couldn’t have been better than The Homing Pigeons. They say Homing Pigeons always come back to their mate, no matter where you leave them on the face of this earth, this forms the soul of the book – hence the title. The cover page is pleasant and thoughtful with pigeons flying all around in turquoise & lavender backdrop perfectly setting the tone of the thoughtful journey you are about to embark in the world of Aditya and Radhika.  The printing, font and word spacing are decent enough to grant reader a comfortable read.

The current era of Indian English literature, by far, seems to be the best one with so many diversified authors sprinkling their varied works on the canvas of national literacy forum, Though, this looks to be promising with some of the authors making their presence felt amidst the best of at global writers, one often feels that with the quantity of the work flooding the scenario these days, the quality of the literature somewhere gets compromised.

And amidst that sulking feeling ‘The Homing Pigeons’ comes like a blow of fresh air and bright hope that there are authors who can proudly hoist the flag of Indian literature at global forums. The author Sid Bahri surely deserves all the accolades and laurel coming his way for his debut work. Considering this is the maiden attempt of the author, I found him well ahead of his contemporaries. The brilliance with which the whole book has been crafted can be understood by the fact that despite the predictability of the climax of story, the reader will find himself hooked into the pages with amusement as to how the story progress towards the end going through twists and turns.

The alternate narrative style of story-telling in which the story alternates from two protagonists’ perspective is exceptionally used with an insight to the mindset & thoughts of both of them. There is a perfect balance in the characterization of two protagonists which again is reflective of author’s complete control over the story. The reader relates to the characters as they are not perfect in real sense and are suffering from the idiosyncrasies of the human nature making them act in certain manner every time life confronts them with choice. The language and efficacy with which some of the screens are written surely touch the chord with the reader.

There remained few grey areas which might appear lagged and left out to some readers, though in the overall context of the book these are insignificant, not having any grave impact to the overall reading experience.

The start of the book is one thing that didn't really excited me with recession hit banker lured to the ‘forbidden’ world of male gigolo by a sex starved mediator working in a corporate set up. The whole thing really appeared to be similar to some Bollywood flick (‘Desi Boyz’). The consolating part, however, remains that once you surpass some of the pages the resemblance diminishes altogether.

Secondly, there were some characters & junctures which would have dealt with a bit more detail. While approaching the climax of the book, I was constantly wondering about the second marriage of Radhika as there appeared no sign of it as the novel approached towards the end; then suddenly in last few pages, there comes a passing reference of the same. The whole episode of her second marriage somewhat appeared neglected & uncorroborated. Likewise, the character of Jasleen (Aditya's wife) appears to be very weak & skewed with the only task of nagging her husband every now and then.

But as I said, the overall experience of the book is so refreshing that these don't really act as a deterrent to that.


The Homing Pigeons deserves a read to welcome Sid Bahri to carry the baton of the Indian English Literature to next level. The impeccable writing skills of the author and the manner in which he draws analogy in two seemingly different stories of protagonists which ultimately converge into beautiful bouquet whose fragrance leaves afresh in your mind even after the story is read, is really commendable.

Go grab a copy & be a part of the homecoming & eventual redemption of two pigeons who are destined to be together despite the follies they commit and wrong flights they take...As Dr. Tharoor has aptly remarks "...a remarkable novel...that deserves all the plaudits it is sure to garner"

Must read for all lovers of Indian English Literature.


A hotelier by education, an ex-banker and a senior executive in the outsourcing industry, Sid gave up a plush career in the outsourcing industry to follow his passions. Based out of Ranikhet, he is now a struggling entrepreneur and a happy writer. A self- proclaimed eccentric, he is an avid blogger who loves to read and cook. Cooking stories, however, is his passion. The Homing Pigeons is his debut novel. He can be reached at sidd.bahri@gmail.com

To know more about him visit his website www.sidbahri.com

Just an afterthought, I got fewer instances of interacting with the author Sid Bahri through messages and mails, and he came across as a humble & generous soul. Despite the success and accolades he has received for his debut work, he remain a grounded soul with a noble heart.

It always feels great to hear from YOU, Please drop in some comments. . .


Heartfelt thanks for visiting here. . .Your thoughts & feedback on the post are awaited & would be highly appreciated. Do spare some time to drop in your comment about the post, page or anything you feel like. . . it always feels great to hear from you :)