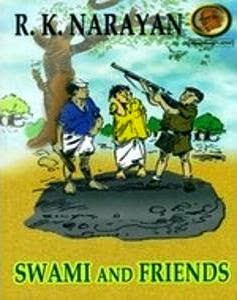 The relevance of Swami and Friends in the history of Indian literature stands in synonymous with the position of R K Narayan. The novel which got published sometime in 1935, actually sprouted from author’s imagination in the autumn of 1930 when during celebration of vijayadashmi, he visualized the first glimpse of his fictional world, Malgudi. The first novel of the literary genius provides the backdrop for all his later works by introducing the world of Malgudi to the readers. Later did he knew and realized, that this fictional creation of his would change the course of Indian literature paving its way amongst the who’s who of world literary geniuses. It all started with a glimpse of a Railway Station in his mental imagery, followed by secondary Albert Mission school, Market Road, the River Sarayu, its typical inhabitants & lo and behold, Malgudi was born!!

The book, Swami and Friends, is about Swami (a child everyone must have lived his / her childhood with), his whole gang of friends & their adventure in the school. It beautifully captures the perspective of a ten year old boy towards school, adults & stuff around. The life during those days meant juggling around between classes, home work, playing mischief with friends, strolling in sun & making strategies to convince parents for the permission to play. Purity in thoughts & actions, something that even now brings silent smile to the face (Well...it did brought smile to my face when I was writing this). Added to this, the literary zest of R K Narayan really takes you to the magical world of Malgudi & its slightly eccentric people who are gullible and are still untouched by the winds of change sweeping over India.

Swami lives in Malgudi (a small town in southern India) with his disciplined father, loving mother and adulating grandmother along with a new born sib. He studies in Albert Mission School along-with his four friends - Somu, the monitor of the class; Mani, the mighty good-for nothing guy (and probably the best of his pal); Sankar, the most brilliant & intelligent boy in the class and finally, Samuel, known as the “Pea” due to size. But this story is not actually of these four but of Swami and two of his other pals – Mani & Rajam.

Rajam’s arrival in the school changes the course of ‘happy go lucky’ life of Swami. Though right from the beginning he remains in awe for the new boy, he refrains from the public declaration due to the initial enmity between Rajam and his best friend, Mani. However, the enmity soon dissolves and transforms into a strong bond of friendship between the three. What follows next is the series of events involving the moments of their togetherness and hostility which witness junctures like Swami bunking the classes for playing cricket to please his friends, his ousting from school, his running from the home and eventual differences with Rajam.

How did Rajam & Mani become close friends after being in the state of enmity initially? Why do Swami run away from his home? How does Swami’s equation with Rajam change? How do they (possibly) unite again?

Grab your copy to unveil the answers to these and, more importantly, to re-discover the joy of your forgotten childhood days.

The title of the books ‘Swami and Friends’ is apt as the whole story revolves around the main protagonist Swami and his friends Mani & Rajam. Their world of activities and mischief they indulge into, sums up the gist of the book. While there are multiple editions of the books which are available in the market, I have seen two of its edition – one by Penguin India (with the cover showing boys playing cricket) and other by Productivity & Quality Publishing (with the cover depicting Rajam firing gun shot in the air while Swami & Mani looking in awe). Both of these covers are simple yet catchy showing respective scene of the novel. The printing, font and word spacing are decent enough to grant reader a comfortable read (though Penguin India edition is comparatively better in terms of look and feel, the other one is also not bad & offers the reader a comfy experience).

'Swami and Friends' brings out that 'bachpann' in you which is silently hidden in some corner of your heart. There is something special about this book that separates it from all other creative masterpiece. That persona of innocence and childhood charm which (I'm sure) everyone would have felt during his childhood days comes alive when one is reading this book & it takes you back in those days. Page by Page, incident by incident, chapter by chapter...you re-visit your childhood with the panorama of school days and mischief you played coming before your eyes…and this is where the biggest strength of this book lies.

The author has successfully positioned himself in the mind of a ten year old lad and has provided his interpretations, excuses and idiosyncrasies is such a naturalistic & relatable manner that even an adult can relate to them, providing a nostalgic feeling of one’s childhood. His understanding of a ten year old child’s psychology enables him to depict carefree yet buoyant world of Swami’s life in most realistic and convincing manner.

I have read the book in my childhood and again as a young adult & have no qualms in saying that it gave me gratifying experience both the times. There is some inherited sweetness & innocence in the book which maintains its charm through-out. The language is simple yet engrossing, and the author narrates the events in a very lucid manner providing adequate wit and humor even in simplest of the things.

Well, there are certain things which don’t have any negative trait & Swami and Friends is one of them. Through-out the reading of the book, I was so glued and involved in Swami’s world of Malgudi that I couldn’t notice any lapses in overall experience.

This is one of those books falling in the 'children fiction' category, which will provide the same (or infact more) joy to adults too as it makes them remember those forgotten cherished childhood moments. The sweetness and naturalness of the book makes it a must read for all...for the simple reason that we all deserve to feel that innocence & tenderness once again...as somewhere down the line, the thought always comes to each of our mind "Wish I could re-live those moments one more time"

If the above thought have stirred your mind ever. . .Go this is a chance for you to steal some of them!!

R.K. Narayan was born in Madras, South India, in 1906, and educated there and at Maharaja's College in Mysore. His first novel, Swami and Friends and its successor, The Bachelor of Arts, are both set in the enchanting fictional territory of Malgudi. In 1958 Narayan's work The Guide won him the National Prize of the Indian Literary Academy, his country's highest literary honor.

In addition to his novels, Narayan has authored five collections of short stories, including A Horse and Two Goats, Malguidi Days, and Under the Banyan Tree, two travel books, two volumes of essays, a volume of memoirs, and the re-told legends Gods, Demons and Others, The Ramayana, and the Mahabharata. In 1980 he was awarded the A.C. Benson Medal by the Royal Society of Literature and in 1982 he was made an Honorary Member of the American Academy and Institute of Arts and Letters.

Narayan who lived till age of ninety-four, died in 2001. He wrote for more than fifty years, and published until he was eighty seven. He wrote fourteen novels, five volumes of short stories, a number of travelogues and collections of non-fiction, condensed versions of Indian epics in English, and the memoir My Days.


It always feels great to hear from YOU, Please drop in some comments. . .