Baba is indeed a karuna-avtaar, always taking that extra step to bless HIS children. As a kind benefactor, HE bestowed upon me many chances to have HIS darshan and feel HIS divine bliss in Sai Dhaam Shirdi. Of lately, it just occurred to me that I should share brief account about my Shirdi trip with my bigger Sai Family so that people (especially those who haven’t yet visited Sai Dhaam) can also enjoy the panorama thereof. I’m reserving the full description of Sai Dhaam Shirdi for some other occasion  And with a prostration to HIS lotus feet, I humbly try to make an attempt to weave the magic of the place called Shirdi in my simple words. . . 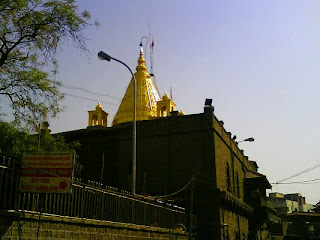 It’s been more than a year now and (by Baba’s grace, of course) every month, one of the Friday signs off bidding good bye to the week just concluded & opening its arms to welcome the weekend wishing and hoping that Baba’s divine grace fills the same with eternal bliss and contentment. The second last Friday of August was one of those days which really make me long for it even before the start of the month. While most of us find ourselves busy in making plans about the weekend to shun off the fatigue and tiredness caused by week’s toiling labour, some souls like me find their place in some coach of Karnataka Express with eyes beaming with the hope to be graced with HIS blissful darshan and heart silently praying that the hope do stay afloat.

Well, before starting off with my experience about the weekend, let me share one general pre-notion (I’m sure you all will affirm with me on this) that people carry with them for the souls (like me) wandering alone in the train. The moment you are discovered to be travelling alone, the fellow travelers start taking all the pain to re-locate you to alternate places by applying all possible permutations and combinations. I think, it all lays pre-planned and pre-researched . . .thanks to our own Indian Railways Reservation Chart cleanly (really ??) pasted on the coach giving those prying eyes enough food for the thought. So the moment you step into the coupe looking for your ‘allocated seat’ (poor Indian Railways, only if they could know that they don’t have much of a say in seat allocation specifically to individuals travelling alone), the stage is all set for the possible proposals lying in store for you.

I, being no exception to the aforesaid rule, was also subjected to the same ‘super-special’ treatment, the moment I made my entry into the train compartment. Various pairs of eyes scanned me through leaving me with a feeling that either I’m a renowned celebrity or an unseen alien (remember ‘Jadoo’ from Koi Mil Gaya). What followed next was the million dollar ask – “Excuse Me . . . Can you please take that seat??”

Anyhow, not dwelling much into the theory of seat exchanging psychology and mechanics thereof, let me better continue with my visit to Sai Dhaam Shirdi (lest you are wondering . . .Yes their hard work did paid off & I did agreed to their proposal of seat exchange!!)

Thanks to change in time table of some of the trains, the Karnataka Express’s scheduled arrival at Kopargaon has been preponed by about 15-20 minutes; which means additional spendable time in Shirdi for a quickie like me. Luckily enough, this time too, the train did stick to its scheduled arrival time and I founded my feet firmed up at Kopargaon Station exactly at 1630 Hours on Saturday. The constant drizzle added icing on the cake with the whole surrounding coming into the life with vibrancy. By the way, did I mention anywhere that . . . Rains & Trains always cherish me!!! And the combination of both is simple mesmerizing, not sure what else you require to spice up the occassion..

Stepping out of the train at Kopargaon has always been a special feeling with lots of enthusiasm and heartfelt anticipation about the next 16-17 hours. Looking at the faces of the people at station belonging to different cast, creed and race at but having only two sets of expressions, is always gratifying, re-affirming my faith in HIS divine grace. The people de-boarding at the station are exuberant with the thought of seeing their lord in just few hours, the eagerness and innocence on their faces reflect how excited they are about their arrival at Sai Dhaam Shirdi to catch HIS glimpse. On the other hand, the ones boarding the train from the station are filled with contentment of having blessed with HIS darshan mixed with the reluctance of leaving & going away from the place. While the eyes of the former glow with the hope of having divine ecstasy amidst so many emotions running within; the eyes of the later stay composed with the picture of Baba duly captured within.

“If you take one step towards Me, I will take ten steps towards you”

So with rains greeting my arrival in Kopargaon, I came out of the station to look for some auto to take me to my final destination – Shirdi. After looking out for some 5-10 minutes, I managed to get into the back seat of one along-with three other devotees. There’s one interesting thing about the auto sharing in Kopargaon station, the auto driver will bump sixteen people (including himself) in one auto and once you are seated therein, you get affixed to the seat so firmly that neither the potholes on the street nor by any other distractions (like constant brake pushing etc.) can bother you as there is little or no scope for you to move from your position.

So once all the requisite people were bumped into the auto, the journey to final 20 kilometers of Sai Dhaam Shirdi started. Soon, the auto was abuzz with all sort of talks ranging from the recent success of Chennai Express at the box office to constant failure of the government at almost every front. While some were chit-chatting about their opinions about the current events happening in the country, some took the brief journey of 30 minutes as an opportunity to catch some more sleep. There were some usual inquiries by some of the first timers about the possible accommodations available and also about the aarti timings of the temple. The guy sitting in front of me was largely silent just like me before suddenly asking me, “Is this your first visit to Baba’s place?” “No, I try to come in every month & Baba has been kind enough (so far) that HE makes my trials possible till now”, I replied.

The conversation blossomed slowly and the guy shared some of his experiences (three actually) about Baba with me. It’s always such a soothing feeling to the ears to hear the story of Baba blessing HIS children through one way or the other.

His first visit to Shirdi was few years back when he was graduated from the college and was in look for some job. Despite his best of the attempts, he was not able to get any decent job anywhere which was causing al lot of discomfort to him. Adding to his woes was constant inquiries / jibes from the people around him, pushing his morale and confidence at all time low. To have a peace of mind and thought, he planned a visit to Shirdi & prayed to Baba to bless him with a stable job. Within a month of his visit, he got a stable job in some good company and all the negativity in his life ended. Needless to say, his belief in Baba got firmed.

During one of his planned visit, he thought of taking his parents along-with so that they also can have the pleasure of Baba’s darshan. On the day of departure, his mother slipped and got hurt in her stomach which caused her unbearable pain. Such was the pain that the family once decided to cancel the visit. But his mother insisted to continue with the trip, as planned and the whole family arrived in Shirdi and took darshan of Baba’s Samadhi. The darshan were good but the pain still persisted. While returning back, one of their fellow passengers asked about the pain and inquired whether they have Baba’s udi with them. When the family answered in affirmation, he retorted, “You all are firm believer of Sai and even then you are not giving her Baba’s udi. Aren’t you aware of the magical impact of HIS udi?” What followed next was indeed ‘magical’; the moment Baba’s udi was given to his mother, the pain started to subside and the acuteness & frequency of the same diminished.

I have actually read many of the miracles of Baba’s udi during HIS life time as mentioned in Shri Sai Satcharitra and also post his life in various texts. But this was for first time that I actually had the privilege of hearing the live experience of someone.

Suddenly Baba's words came alive in my mind, "I shall be ever active and vigorous even after leaving this earthly body..."

By the time the second experience ended we had entered into the territorial boundaries of Shirdi.  Then he narrated his final experience which was related to his current visit to Shirdi.

It is always said that the visit to holy shrines is not planned by the person but is written by the almighty . . . its only when HE calls, you can actually go. No matter how firm is your plan and how confirmed is the preparations, until the CALL is there, everything is hung suspended.

Similar thing happened with my fellow passenger too, He was trying to plan a visit since long but the plans got cancelled every time due to one thing or the other (once the program was cancelled despite tickets being booked). And this time during the weekend, he just thought of visiting Shirdi and went to station to check about the tickets availability for the night train. Before going further with the narration, would like to mention that having confirmed ticket to Kopargaon in Karnataka Express is indeed a Project which gets successfully completed only if you plan well in advance (say one & half to two month).

And my fellow passenger was also aware of this thing and that’s why he dint even bothered to ask inquire about the reservation in the train and thought of travelling through a general class. But as I had written above, when the CALL is there no one can stop you. Suddenly he got a call from one of his cousin to check the ticket reservation in sleeper class as online inquiry shows that there are still 5 tickets available in the train. Lo and Behold! The tickets were indeed available and he was speechless after seeing this (and so was I as I’m aware of the kind of rush in the train considering the lower quota for the station).

I couldn’t say much except, “. . . it seems that someone else is scripting your visit this time.”

I bid him good bye with a smile on my face & re-affirmed belief in my heart; and started walking to my booked accommodation wondering about Baba’s assurance to HIS children. . .

“If you take one step towards Me, I will take ten steps towards you.”

***Read the second part of the trip report here***

It always feels great to hear from YOU, Please drop in some comments. . .