Book Review: THE RACE OF MY LIFE by Milkha Singh 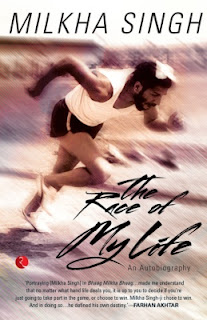 Iqbal’s couplet given on the first page of the book aptly spells out the gist of the autobiography of / by India’s finest athlete ‘The Flying Sikh’ Milkha Singh. The couplet reads as “Mita de apni hasti ko agar koi martaba chahe, ki dana khak may mil kar gul-e-gulzaar hota hai” meaning destroy your entire existence to be at the pinnacle as to blossom into a fragrant flower, a simple seed has to surrender itself to the soil.

The book is all about Milkha Singh’s power preservance, dedication and never say die attitude that has taken him to the zenith of the sporting arena, something which remains a yearning desire of every sportsman to attain. His passion for running found its root from his troubled childhood, sprouted into a bud during his army training days and ultimately blossomed into a flower during his sporting career. . .a flower that did spread India’s fragrance not only in country’s domestic backyard but also in international garden of champion athletes.

It starts with a brief background of Milkha’s life in undivided India in a village that found itself on the wrong side of the map when the unfortunate partition of the country took place. The British along-with the political guardian of the country agreed to draw lines on certain part of the land without thinking much about the lives and souls that remained with a dubious choice of sticking to the roots or reach out to the stem. Milkha’s troubled childhood got triggered at the stroke of midnight hour of Aug 15 1947, when the religious boundaries drawn between Hindus and Muslims actually left their mark in the heart & soul of the people. The friends and mates, by choice or compulsion, came under the influence of the radical thinkers causing the bloodbath that impacted the lives at both side of the border. Milkha’s village got its place in the newly found Pakistan and being minority in the area they were subjected to the grim choice of to perish or to convert. The denial of the later resulted in acceptance of the former and consequently most of his family got slaughtered. He, somehow, managed to escape the massacre finding his way to Delhi through various junctures in Multan and refugee camps.

He found his solace with his sister Isher who till date remains a mother figure for him. One right choice that destiny chose for him by way of entry in Indian Army after series of rejections changed his course of life from being a petty criminal soul to become an inspiring figure for many.

His association with army actually unearthed his sprinting capabilities and the marathon that started to avoid daily army chores & win a daily glass of milk concluded with taking him to the highest pedestal of international athletic arena. What followed next were the series of events that witnessed the tracks moving from army cantonment to zonal tournament to national competition and eventually to international championships. The sikh conquered all (well almost) except one which continue to haunt him even now. Infact, one of his historical win in Pakistan earned him the title of "The Flying Sikh".

The book also enlists the story of his marriage with a national volleyball player Nimmi. The initial recognition and bond of solidarity between the two Indian in foreign soil later blossomed into the feeling of love eventually consummating into the marriage of two sporting icons, despite intense family pressure to wash away their romantic dreams (Milkha being a Sikh & Nimmi, a Hindu).

How Milkha Singh actually escaped the bloodbath that swallowed lives of majority of his family? How did the innocent sikh in his early teen got into the path of petty immoral acts? How an early race in army cantonment did changed the course of his entire life? Which fatal mistake still torment the flying sikh, despite achieving so much in life? How the athlete got the title “The Flying Sikh”? How Milkha got united with his better half despite pressures against their marriage? How did he contribute to the sport off the racing track as an administrator?

Grab your copy to unveil the answers to these and to discover how one can define his own destiny by undying zeal and unending passion for his aim.

Book’s title is aptly justified as it enumerates the story of someone whose life’s sole passion has been running, running and running. The cover of the book also attracts reader’s attention with a sepia imprint of the legend himself (seen sprinting) having title written at the right bottom in ‘running hand’ style font. An excerpt of the endorsement by Farhan Akhtar in front and Rakeysh Om Prakash Mehra on the back cover, though, gives an hint to the reader that book will have resemblance to the movie. The printing, font and word spacing are decent enough to grant reader a comfortable read.

The biggest strength of the book lies in its simplicity which is evident in words as they weave to form the whole autobiography of the sporting legend. Being neither an author nor a writer, the language and narration through-out the book stays simple yet convincing. The sportsman just couldn't think of any better time to release his story than this, when the whole country still hasn't completely got away with the cinematic brilliance of the movie (Bhaag Milkha Bhaag) made on the legendary athlete.

One of the better part of the book is the honesty attached to the narrations mentioned therein. For instances, at various junctures he acknowledges his current being to all his coaches who took extra effort to train him to adapt to various circumstances. Infact he owes his entire success and achievement to his coaches, something that is indeed humble and worth appreciating.

There’s one more interesting point I would like make (which to a large extent might just be my interpretation or comprehension) that while reading the book, I just felt that the true sportsman (like Milkha) are no less than the soldiers that toil so hard to guard the honor of our country at the territorial boundaries. Reading through the experiences & narrations shared by the author about his preparations and pressures before a high profile tournament, the feeling of pride after winning an international championship / medal, the contentment & pride in hoisting our “TIRANGAA” on foreign soil (etc.) made me salute these passionate sportsman that have made our country’s name shine at international levels. The book, in some sense, manages to bring out the patriotic fervor for the country, making the reader proud of its legacy.

The collection of some of the rare photographs featuring the legendary runner, highlighting various aspect of his personal and professional life adds to the pleasure of reading. The assortment of these pictures does have the tendency to take the reader a bit more into Milkha’s life.

Despite having said so, I was slightly disappointed by the thin 150 page paperback story book of one of our greatest athlete which dint really traversed much beyond what has already been portrayed in the movie Bhaag Milkha Bhaag. There are certain sections which were not shown in the movie (guess due to the length constraints) still (I think) the sporting enthusiasts & his recent additions to the fan base (thanks to the platform created by the movie) must be aspiring for a detailed encyclopedia into the legend’s inspirational life with some exhaustive details. Despite reading through the entire story from the horse’s mouth, some questions still remain unanswered yet, which might just not go well with some of the readers.

The beauty of the autobiographies of self made legends is that these really serve as an inspirational piece of anecdote to win and excel in adverse circumstances despite the inherit limitations. The Race of my Life is no exception; the book does create an inspiring account of one man’s journey from rags to riches overcoming all the odds coming his way through his undeterred determination and never die attitude. Through-out his sprinting carrier, he was wholeheartedly dedicated to racing with virtually no distractions allowed (so much so that he even refused to get carried away with the stardom he enjoyed & always remained committed to his ultimate aim).

Leaving aside the positives and negatives, the book reading always have a special flavor whether or not it has been adapted into movie. I have met and seen the class of reading enthusiasts (including me), who have thoroughly enjoyed the book even after or before watching the movie. The recent series of Harry Potter mania is the live example of the same.

If you have not seen the movie, go for the book first and even if you have seen it, grab this up as this will bring back the inspiring and powerful moments, with a little more insight into his life...filling you with positivity (& not to forget that 'patriotic fervor' I mentioned earlier).

All in all, worth a read for sure.

Milkha Singh was born in 1932 in undivided India and he joined the army in 1951. Arguably, India's best male athlete, he received the Padma Shri at the height of his career in 1958. Although he stopped participating in competitive events in the early 1960s, he has dedicated his life to sports. He retired as Director of Sports and Youth Programme, Punjab Government, in 1991. He established the Milkha Charitable Trust in 2003 in Chandigarh to help poor and needy sports person and their families.

It always feels great to hear from YOU, please drop in some comments. . .